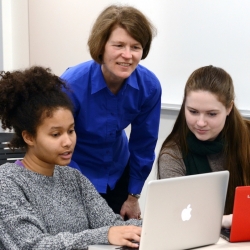 In recognition of her efforts to advance the role of women and girls in technology, Dartmouth engineering professor Petra Bonfert-Taylor has been named 2018 TechTeacher of the Year by the NH High Tech Council’s TechWomen | TechGirls Committee.

For more than two decades, Bonfert-Taylor has developed programs and tools to make engineering and math accessible, particularly for students who want to pursue a STEM degree but whose early years didn’t give them the academic foundation, encouragement or role models to help them succeed. Bonfert-Taylor’s work is keeping underrepresented students in the game.

Nationally, 20% of engineering undergraduates are women, according to the National Science Foundation. On campus, however, Bonfert-Taylor’s work has contributed to a boost in interest and commitment among women, helping to make Thayer School of Engineering at Dartmouth the first national research university to graduate a class of more than 50% women.